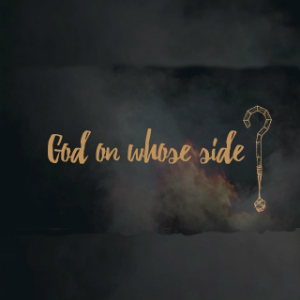 The Fall of Saul

Mike Paget God On Whose Side?
Watch Listen

Saul was thirty years old when he became king, and he reigned over Israel forty-two years.

The Philistines assembled to fight Israel, with three thousand chariots, six thousand charioteers, and soldiers as numerous as the sand on the seashore. They went up and camped at Mikmash, east of Beth Aven. When the Israelites saw that their situation was critical and that their army was hard pressed, they hid in caves and thickets, among the rocks, and in pits and cisterns. Some Hebrews even crossed the Jordan to the land of Gad and Gilead.

Saul remained at Gilgal, and all the troops with him were quaking with fear. He waited seven days, the time set by Samuel; but Samuel did not come to Gilgal, and Saul’s men began to scatter. So he said, “Bring me the burnt offering and the fellowship offerings.” And Saul offered up the burnt offering. Just as he finished making the offering, Samuel arrived, and Saul went out to greet him.

“What have you done?” asked Samuel.

Saul replied, “When I saw that the men were scattering, and that you did not come at the set time, and that the Philistines were assembling at Mikmash, I thought, ‘Now the Philistines will come down against me at Gilgal, and I have not sought the Lord’s favour.’ So I felt compelled to offer the burnt offering.”

Then Samuel left Gilgal and went up to Gibeah in Benjamin, and Saul counted the men who were with him. They numbered about six hundred.

Saul and his son Jonathan and the men with them were staying in Gibeah in Benjamin, while the Philistines camped at Mikmash. 17 Raiding parties went out from the Philistine camp in three detachments. One turned toward Ophrah in the vicinity of Shual, another toward Beth Horon, and the third toward the borderland overlooking the Valley of Zeboyim facing the wilderness.

Not a blacksmith could be found in the whole land of Israel, because the Philistines had said, “Otherwise the Hebrews will make swords or spears!” So all Israel went down to the Philistines to have their plow points, mattocks, axes and sickles sharpened. The price was two-thirds of a shekel[g] for sharpening plow points and mattocks, and a third of a shekel for sharpening forks and axes and for repointing goads.

So on the day of the battle not a soldier with Saul and Jonathan had a sword or spear in his hand; only Saul and his son Jonathan had them.

Now a detachment of Philistines had gone out to the pass at Mikmash. One day Jonathan son of Saul said to his young armour-bearer, “Come, let’s go over to the Philistine outpost on the other side.” But he did not tell his father.

Saul was staying on the outskirts of Gibeah under a pomegranate tree in Migron. With him were about six hundred men, among whom was Ahijah, who was wearing an ephod. He was a son of Ichabod’s brother Ahitub son of Phinehas, the son of Eli, the Lord’s priest in Shiloh. No one was aware that Jonathan had left.

On each side of the pass that Jonathan intended to cross to reach the Philistine outpost was a cliff; one was called Bozez and the other Seneh. One cliff stood to the north toward Mikmash, the other to the south toward Geba.

Jonathan said to his young armour-bearer, “Come, let’s go over to the outpost of those uncircumcised men. Perhaps the Lord will act in our behalf. Nothing can hinder the Lord from saving, whether by many or by few.”

“Do all that you have in mind,” his armour-bearer said. “Go ahead; I am with you heart and soul.”

Jonathan said, “Come on, then; we will cross over toward them and let them see us. If they say to us, ‘Wait there until we come to you,’ we will stay where we are and not go up to them. But if they say, ‘Come up to us,’ we will climb up, because that will be our sign that the Lord has given them into our hands.”

So both of them showed themselves to the Philistine outpost. “Look!” said the Philistines. “The Hebrews are crawling out of the holes they were hiding in.” The men of the outpost shouted to Jonathan and his armour-bearer, “Come up to us and we’ll teach you a lesson.”

So Jonathan said to his armour-bearer, “Climb up after me; the Lord has given them into the hand of Israel.”